Winnipeg, MB—After repeatedly denying a cut to inclusion support funding for children with exceptional needs, the Families Annual Report reveals a clear reduction in the number of children who are provided support.

“All children should have equal access to quality child care, no matter their abilities,” said NDP Critic for Families Danielle Adams. “The Pallister government has a moral and legal responsibility to properly fund kids with exceptional needs, yet we are seeing less and less families get the support they need.”

The provincial government funds the Inclusion Support Program for child care centres and family child care homes that pays for aides to assist children with exceptional needs. The 2018/19 Annual Report for the Department of Families shows 1,429 children received funding in 2019, down from 1,471 in 2018.

In June of 2017, former Families Minister Scott Fielding put a freeze on new funding applications pending a review of the Program. The hold came despite the province signing a $46 million agreement with the federal government to add child-care spaces, including for “children of varying abilities”. After significant public backlash, the Minister announced he would reverse the freeze. However, the Annual Report shows the number of supported children in the program has been steadily decreasing since 2017.

“We know the number of children diagnosed with disabilities or cognitive-development issues is increasing, so it doesn’t make sense for the province to be funding fewer children,” said Adams. “The Minister must be transparent with families—is she intentionally interpreting the policy differently in order to spend less supporting children?” 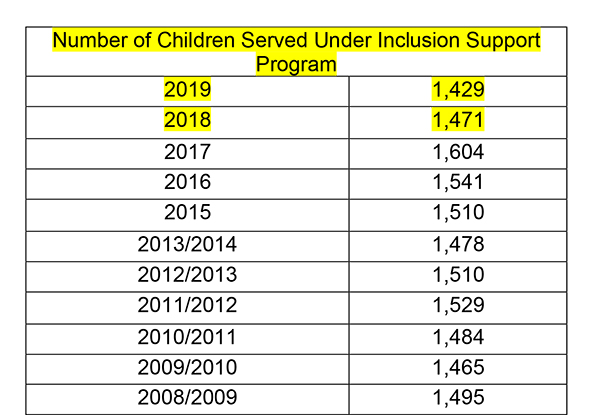