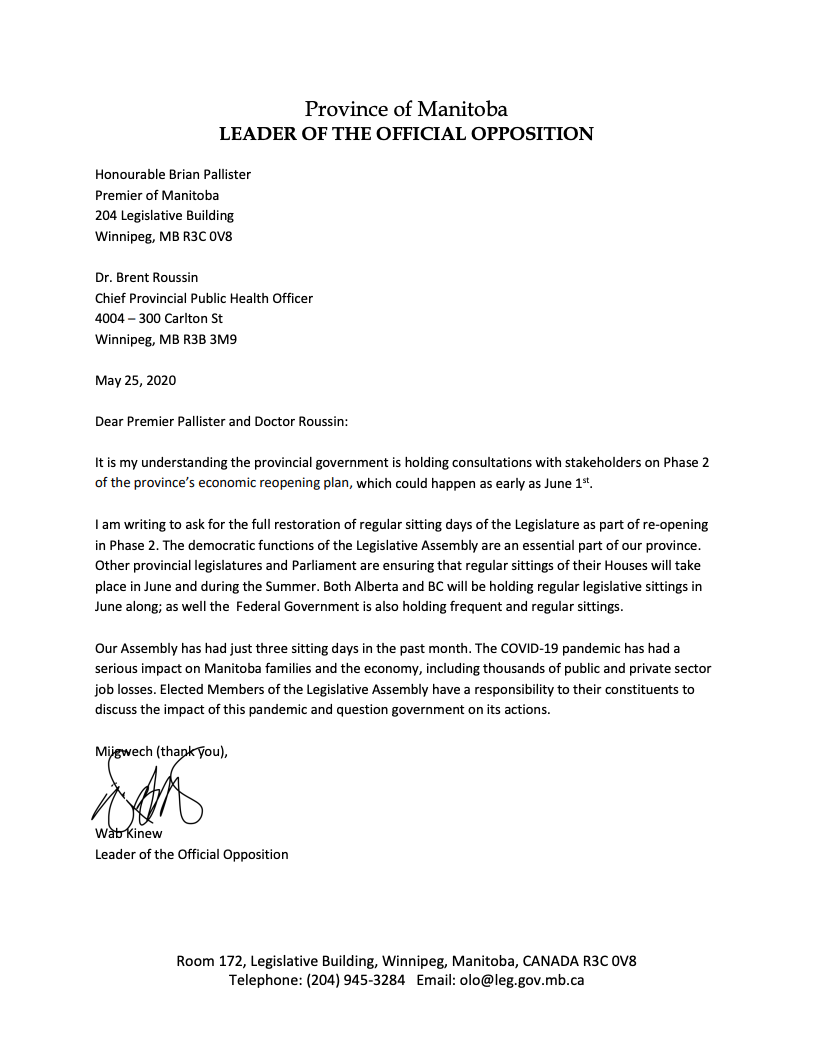 “The democratic functions of the Legislative Assembly are an essential service for Manitobans—especially in light of thousands of public and private sector layoffs. Yet the Pallister government has only allowed the Legislature to sit three times in the past month. They are using the cover of a pandemic to push through harmful cuts and refusing to face questions from the Official Opposition,” said Kinew. “It’s an affront to the democratic values of our province and the families that our MLAs represent. If the Premier thinks businesses and restaurants can go back to work, he should start doing his job as well.”

In a letter addressed to Brian Pallister and Dr. Brian Roussin, Kinew asked for regular and frequent house sittings be included in Phase II of the reopening plan for June 1. The Official Opposition has repeatedly called for additional sitting days but the Premier has refused to agree. The Legislative Assembly has indicated they will be ready to hold virtual sittings by next month.

Kinew pointed out that other jurisdictions have developed plans to ensure regular sittings in June. Provinces representing the vast majority of Canada’s population – including Quebec, Ontario, Alberta, British Columbia and Prince Edward Island - are planning regular sittings of their Legislatures in June. What’s more, the Federal Parliament will continue to sit multiple times a week in June.

“If the Federal Parliament and other provinces are able to adapt and return to regular sittings, there is no valid reason why the Pallister government can’t do the same. As elected members of the Legislature, we have a duty and obligation to serve our constituents, and the NDP is prepared to continue fighting for Manitoba families and workers - and protect our economy - during this pandemic,” added Kinew.