NDP Calls for Return to House to Discuss Hidden Report

Treaty 1 Territory, Winnipeg, MB – The Pallister government is hiding the results of a review of Manitoba’s Police Services Act and violating the Act’s reporting requirements by refusing to make it public.

“Now more than ever we need to be having critical discussions about accountability, transparency, oversight and justice in our province,” said Fontaine. “But the province has ignored legal deadlines and is sitting on this report. The Manitoba government has a legal obligation to make this report public—it’s one of the first steps we can take to make police services more inclusive, more accountable and safer for Black, Indigenous and all people of colour in our province.”

“There’s no doubt the Pallister government’s cuts to health care and housing, their failure to address Manitoba’s addictions crisis and their funding cuts to community organizations are hurting Manitobans. The Premier doesn’t want to admit that his cuts are hurting families so he’s burying a report which would only shed more light on that,” said NDP Justice Critic Nahanni Fontaine said. “The public deserves transparency and oversight on Manitoba’s police services. The Pallister government ignored their legal obligation to make this review public - Manitobans deserve better.”

Under The Police Services Act the province is legally required to undertake a comprehensive review of the act within five years of it coming into force. Section 90 of the Act states that once the review is undertaken, the Minister of Justice has one year to make the review public by tabling it in the Legislative Assembly. The Justice Minister published an RFP for the review in May of 2019 and wrote in a press release report would be completed by "spring 2020".

“We know investment in needed supports – mental health services, addictions and treatments, housing and community supports – are desperately needed in our province. This must be part of any review of how police services are structured in our province”, added Fontaine. 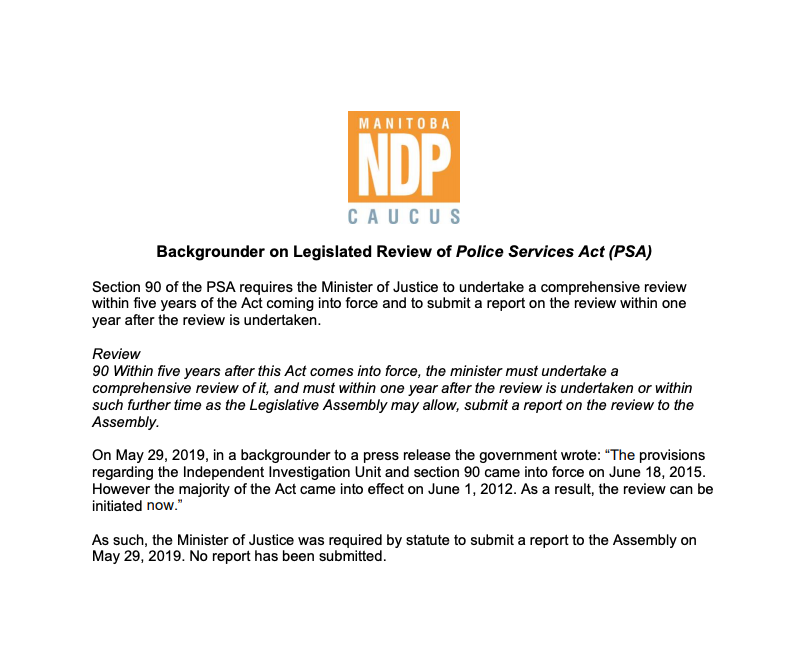